I'm a big fan of the zombie genre. I love World War Z (the book), 28 days later, 28 weeks later, I am legend (OK, not really zombies but still) and Z Nation.

But one thing that's always troubled me is that zombie stories hardly ever tell you how the outbreak started how the epidemic turned apocalyptic - in some cases the issue is ignored altogether, but even when it isn't, it's hardly ever given a satisfactory explanation. OK, so someone gets a zombie virus through some weird mutation and starts biting people, who then turn into zombies - so what? A SWAT team should be able to take them down before the problem gets out of hand, even if killing them requires headshots. Even if it started with a group of people who turn into zombies all at once (like in I am legend) it shouldn't really be an issue for the military. After all, zombies are really ineffective fighters - they don't use any tools so they can't hurt you unless they get close enough to bite you. Introduce a curfew and place Navy Seals on the city rooftops, and the problem will be solved long before we have an epidemic large enough to truly tear down civilization.

However, having observed politics in Europe these past couple of months, I have realized that a zombie apocalypse may well be a real threat.

You see, if ever there was a zombie outbreak, the spontaneous reaction would of course be to try and kill the zombies and warn people about them through emergency public service announcements and similar. But then, there would soon be objections from the left: Why single out zombies? They aren't the only ones who bite! Physical assault through biting has been around as long as humans have been around. Why are we suddenly so upset when it's zombies doing the biting, but when Mike Tyson bit his opponent's ear, no-one called for SWAT teams? Clearly this must be because Tyson was entertaining the privileged white middle class, while zombies are just doing what is natural for them with no audience and no greedy capitalists profiteering from them.

They would insist that instead of warning people about zombies that we warn them about "violence" and "brain enthusiasm", not singling any group out. They would remind people that "brain enthusiasm" from non-zombies has caused thousands of deaths  too - medical malpractice by poorly trained brain surgeons being the main source - but sure no-one cared about that since brain surgeons are mainly white one-percenters, so why all this uproar about zombies? No doubt this is racism! The public would also be informed that the best way for them to protect themselves from brain enthusiasm is to wear a helmet at all times (that's especially effective against those nasty brain surgeons!).

Also, really what's the big deal about eating brains? Lots of non-western cultures (that are way better than our own!) have brain as part of their cuisine. Eating brain is no different from eating muscles which the heterosexual cis-men who run the world do every day. Oh and suggesting that consuming human flesh is different from animals is just speciesism.
If the PC left ever got to the point of admitting that eating human brains may be a somewhat unethical behavior, their next step would be to introduce educational programs - and to make matters worse, these would not be targeted at zombies; instead, your non-zombie kids would have to attend classes on why you shouldn't bite people and eat their brains. Secondly, they might suggest segregating public areas into zombie and non-zombie zones (but don't you dare use violence to enforce it).

And then the PC pundits would argue that to whatever extent zombies may be a problem, shooting them is just treating the symptom, not the cause. Since the zombie epidemic would probably affect the poor disproportionally (they are more prone to live in overcrowded areas where infection would spread fast), politically correct pundits would no doubt try to place the zombies' behavior in a bigger context and blame the excessive brain enthusiasm on lack of education, cultural appropriation, and who knows - maybe they'll find a way to blame it on lack of contraception? Because really, who hasn't found themselves making out with a beautiful girl, realized they didn't have a condom and just eaten her brain instead? It could have been avoided if not for those crazy abstinence-only conservatives keeping the streets from being flooded with rubber!

And let's not forget that biting is not normally considered a capital offense. If a non-zombie bites someone, that'll at most cause a fine or a short prison sentence. Why treat zombies differently? What happened to equality before the law? Again this is just more racism.
Rational voices would suggest that shooting an infected friend or family member should be considered a justified mercy killing, but again the politically correct would object: How do you know they don't want to be a zombie? What they do with their lives is really none of your business! How do you know they want you to kill them unless you receive their enthusiastic consent?

You may think that a zombie epidemic would cause us to arm the police heavily, but in fact, the opposite would happen: As the number of police shootings increased (from cops trying to protect people from zombies), the left would react by demanding that the police force be "demilitarized", since there's a clear correlation between police shootings and violence (it's never occurred to them that maybe the violence happens first, and THEN the cops shoot - especially with zombies).

Anyone suggesting that finding a cure should be a top priority and that money from non-defense, non-law enforcement budgets should be diverted into research with this goal would be lynched by the PC mob. How dare they suggest that curing brain enthusiasts is more important than providing mandatory LGBTQIA+-sensitivity training to all public sector employees? And why should the military budget be protected? Clearly anyone suggesting that must be in the pocket of the military-industrial complex that is attempting to pit humans against zombies to start a war and increase their profits! Just like they did with Iraq, Afghanistan, and every other war America has ever engaged in.

Finally the left-winged economists led by Paul Krugman would chime in that the zombies are actually great for the economy, since they've caused a massive increase in consumer spending and inflation as people are willing to pay anything right now for canned food and weapons.

Of course, none of these PC pundits, politicians and academicians will actually live in the zombie-infested areas. And by the time the epidemic gets bad enough that they give up and start taking real measures, it'll likely be too late and the zombie apocalypse will be a fact. 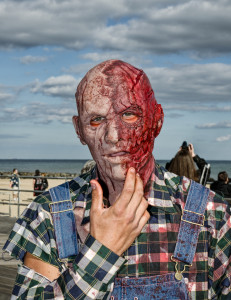 And God help us if the epidemic starts anywhere other than the United States or the UK. Those countries at least have the ability to defend themselves, while a country like Sweden with a standing army of 30 000 would quickly be overrun, and there would be 9.8 million Swedish zombies pouring out into our neighboring European countries, consuming the tiny brains of the college students waving "Zombies welcome" signs along the borders. Of course, the American military could intervene and help Sweden defend itself against the zombies, but the PC left would argue that this would be American imperialism and that the US shouldn't get involved and pick sides in the Swedish "civil war". After all, remember what happened in Vietnam!

In case it's not obvious, I should state that this post is based on the response of the PC mob to the wave of sexual assaults in Germany, Austria, Sweden and several other countries that have welcomed significant numbers of Muslim refugees. "Not all rapists are Muslim", "women shouldn't dress provocatively", "we need more education on consent for everyone", "deporting foreign rapists means they get a harsher punishment than other rapists, that's not equality before the law" and "we should segregate men and women, that would solve the problem" - these are all claims that have actually been made by European leftist politicians and pundits.

I hope that if The Walking Dead finally reveals how the virus became a worldwide epidemic that political correctness will be the culprit. Anything else would honestly feel unrealistic. Thank you for reading.