We still don't have a date for the referendum on UK's membership of the European Union, but the campaign - or as I like to call it, the Second Battle of Britain - is already getting started.

Recently I wrote an article on what the Better Off Out campaign should do to win the referendum. In this article, I am going to follow up by refuting the economic case for Britain's membership in the EU. Like I said, the campaign has already began. I read a number of British papers, and the talking points that the Pro-EU campaign will use are already materialising. To no-one's surprise, they are built on lies and distortions.

I really don't mind this that much. I like it when my opponents lie because that means they've run out of facts to support their case. When my opponents lie it makes me more convinced that I'm right. That being said, these lies still have to be refuted. So without further ado, here is a guide to the most common economic claims made by Europhiles and why they are wrong.

This claim assumes that the UK cannot keep trading with EU after exiting the union. You know what's funny? Earlier today in the shop I could have sworn I saw some stuff produced in China... so is China a member of the EU? My geography must be rustier than I thought, I didn't even know China was in Europe! When did they move?

Joking aside, we all know that the EU trades with the outside world. The "4 million jobs" figure assumes that every job in companies that export to the EU will be lost, and no economist (whether for or against the EU) seriously thinks that is even remotely possible.
I cannot stress this enough: Leaving the EU does not mean free trade will cease. The Europhiles seem to think that foreigners are buying British goods as an act of charity, but speaking as a foreigner, when I buy British goods it's because they are better than the alternatives. Maybe I'm weird, but I suspect I'm not alone in this. Free trade between the UK and the EU is mutually beneficial - trading with Britain is not an act of charity on behalf of the rest of Europe, and therefore, they will want to keep doing it even after the UK leaves. This is literally economics 101.

2) "But if we trade with the EU, we'll have to follow their rules but we won't have any influence on them"

This is the follow-up argument to the first one. If you can get a Europhile to admit that trade with the EU won't cease after a Brexit, they'll hit you with a "worst of two worlds arguments": All the rules will still apply, but the UK won't have any influence as it won't have any members of the European Parliament or any commissioner anymore.

As for "having no influence" on the rules... the UK is a trading partner with the EU, and not an insignificant trading partner at that. To think that the EU - or anyone - would make regulations without taking into account how this affects the countries that are their customers and sellers is outrageous. The EU is stupid, but it's not that stupid.

Some friends of the EU will respond that the EU would want to "punish" Britain for leaving. First of all, if you're in a relationship out of fear that your partner will hit you if you leave, then you're in an abusive relationship (somebody please give Cameron the number to a hotline). Second of all, it's highly unlikely that the EU will act like a "scorned lover" if Britain leaves, because the EU never really loved you in the first place. In fact, I think a lot of politicians around Europe would (secretly) be very happy, because the UK has long been a roadblock against federalisation, and without the UK it'll be so much easier to turn the EU into a United States of Europe. Ideally of course they would like the USE to include the UK, but a USE without the UK is still better than none at all. And finally, again, trade is mutually beneficial - if the EU refused to trade with the UK out of spite, this would cause a uproar in the business communities around the EU who benefit from this trade, and the politicians would soon yield to this pressure. 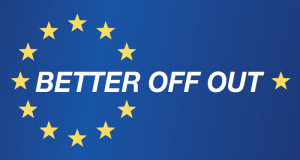 Whenever someone says this, I always ask "Compared to what?". Compared to having no immigration whatsoever, this might be true, but compared to having a system where you can pick the immigrants you want and leave the rest, it simply can't be true. If you get 10 immigrants out of which 8 are profitable, you may end up in the black overall, but you'd still be better off if you had just admitted the 8 profitable immigrants and denied the other 2. Unrestricted immigration cannot beat restricted immigration from an economic viewpoint*.
Today, it is easier to immigrate to the UK if you're a janitor (or a panhandler) from Romania than if you're a medical doctor from the US. The current immigration system has no basis whatsoever in economics - your ability to economically contribute to the UK matters less than where you were born.

Another claim often made at the same time is that leaving the EU would force millions of British citizens living abroad to come home. Just like with trade, this ignores that British immigration is profitable to the receiving countries. Why would they want to kick out people who are contributing to their economies? It makes no sense whatsoever. Yes, unemployed Brits receiving benefits in their host countries may be forced to return, but quite frankly that's only fair.

4) "The business community wants us to stay in the EU; big corporations will move abroad if we leave"

There is some validity to this argument: A majority of higher-ups in big British corporations would like Britain to remain in the EU. However, there are many reasons why they may feel this way:

1) Many of them falsely believe (probably because the government told them so) that leaving the EU would mean leaving the single market. As I've already explained, this is not the case.
2) Businesses in general tend to have a reluctant attitude towards big, seemingly risky changes; staying in the EU seems like the "safe" option.
3) Many businesses may dislike any kind of "nationalistic" policies, fearing that they will eventually be followed by protectionist or other "isolating" policies which will be harmful. This fear is, of course, unfounded.
4) Sadly, many businesses today depend on cheap immigrant labour, mainly from eastern Europe. These businesses would obviously be hurt by Brexit.
5) Leaving the EU would mean the UK could negotiate free-trade agreements with the Commonwealth countries (and other countries as well). While this is would no doubt be a boost to the British economy, some businesses may not like the idea of foreign competition.

Whenever you hear of a business threatening to leave if Britain does not stay in the EU, remember that they said the exact same thing 15 years ago when the debate was on whether or not to join the euro. Remember how the pound sterling was going to sink the British economy and cause all the jobs to move overseas? In the past five years, the UK has created more jobs than the rest of the EU combined.

Moving a company is not uncomplicated, cheap or risk-free. That's why it is so often used as a threat, but so rarely carried out. Kind of like the voters who promise that they'll move abroad if their candidate doesn't win.

As you can see, the economic case for British membership in the EU is built on lies and distortions. This goes double for the non-economic case (such as the idea that the EU brought peace to Europe), but that's another post. Thank you for reading.