Donald Trump Was Right About Sweden

In a speech February 18, President Trump made an offhand remark about my home country of Sweden. He said:

The statement met with a lot of criticism in Sweden. Former Prime Minister Carl Bildt tweeted:

”Sweden? Terror attack? What has he been smoking?”

But Trump wasn't talking about a terror attack; he was talking about a new set of problems that very few people would associate with Sweden. The relevant question is – what has Carl Bildt been smoking to avoid seeing the fast, negative changes his country is now going through?

The answer is, that Bildt has been getting high on over consumption of Swedish mainstream media. Swedish journalists lean heavily towards the liberal left, and are marinated in the consensus culture that is so prevalent in Sweden's academic institutions, where you are required to have the right opinions in order to fit in. One way to achieve this is to criticize the Swedish and Western culture – and the United States in particular – but be very open minded towards other cultures. When it comes to the issue of immigration, this means ignoring problems and dismissing those who want to discuss them as racists.

Journalists and politicians can look the other way, because they don't live in the same world as ordinary people. Stockholm, in particular, is characterized by total segregation. Some areas are inhabited exclusively by rich, white ethnic Swedes. This is where most journalists live and work. And then there are the suburbs, where some, like Rinkeby – a part of Stockholm that has gained international notoriety due to recent riots and car fires – are inhabited solely by immigrants. You will be hard put to find any journalist in these areas. Thus, they are unaware of the problems regular people in mixed suburbs and smaller cities experience, in places where things happen closer to home.

To most journalists, a critical view on immigration is just a negative theory and a theoretical, political viewpoint, not an actual observation of people's everyday reality.

This is precisely why they believe the problems don't exist – they themselves have never encountered them. And this legitimizes their fierce attacks on those who try to highlight the problems created by massive immigration from non-Western countries, Muslim countries in particular. A fresh example of this phenomenon is when the Swedish-Czech author Katerina Janouch spoke out recently, and criticized Sweden's migration policies on Czech television. Janouch was chastised by Prime Minister Stefan Löfven himself, who stated that he thought her remarks were "very odd", and a bookstore in Uppsala withdrew all her books. Another example is economist Tino Sanandaji, who recently released his book "Mass Challenge". In the book, Sanandaji criticizes the Swedish open door migration policy, using statistics as a tool. A number of Swedish libraries have declared that they refuse to purchase the book, because it supposedly violates the United Nations Universal Declaration of Human Rights.

But despite the political and media establishment's attempts to put a lid on the problems, the truth is now seeping out, and reality is reaching a boiling point.

A couple of weeks ago, I interviewed a Detective Inspector who investigates serious crimes in the immigrant heavy neighborhoods of suburban Stockholm. He noted that while one squad car is enough to secure a "Swedish" suburb of Stockholm almost every day of the week, that would be unthinkable in the immigrant suburbs of Stockholm, where cars are set ablaze every week. In the immigrant suburbs, the police must be prepared for riots, violence and threats, and the risk of police vehicles being vandalized. False alarms are commonplace, the purposes of which are to lure the police into a trap and then pelt them with rocks. A friend of mine who lives in this kind of area has also attested to this happening on a regular basis.

The Detective Inspector also told me that a patriarchal Islamic culture has gained foothold in Rinkeby. Young women cannot go out at night, lest they be branded as whores. Ethnic Swedes – both men and women – run the risk of being brutalized. Further, there is an active "sharia police", Muslim men approach women who they feel dress indecently, and explain to them that they need to cover themselves up. The Detective Inspector had observed such incidents in person, but since it is not a crime for men to approach women and talk to them, the police had been unable to intervene.

The Detective Inspector also told me, that the rescue services – like the fire department and ambulance service – will not go into these suburbs without police escort. He also confirmed what police officer Peter Springare from Örebro has previously stated; when it comes to violent and serious crimes, you rarely see a Swedish name in the investigation papers.

Besides criminal activities in the suburbs, Sweden also has a problem concerning jihadism and salafism. At least 300 "Swedes" have traveled to Syria and Iraq to join the Islamic State. Historically, Sweden has had no experience of jihad or a paradise of virgins.

I have myself met with several salafists. In 2007, I had coffee with a crowd from the Örebro mosque (and briefly met Mehdi Ghezali, the "Swede" that was imprisoned at Gitmo), and I asked them what their view of the then living terrorist leader Usama bin Laden was. Was bin Laden right or wrong to attack the United States? Wrong, they said. However, when asked to motivate why he was wrong, it wasn't the immorality of attacking what we in the West would call innocent civilians that disturbed them. Instead, they purported that bin Laden was wrong because only a caliph can order jihad. And bin Laden was, in their eyes, no caliph. This was the reason his actions were wrong. They also explained that they believed it is right to stone adulterers to death, but that the penalty can only be carried out in an Islamic state. When I asked if they want Sweden to become an Islamic state, they said yes.

Salafists have for a long time flown under the radar in the Swedish "exclusion areas". A heartbreaking example from aforementioned Rinkeby was the imam Fouad Shangole. He came to Sweden in 1994 and worked as an imam in Rinkeby, by all accounts living well off the Swedish welfare system. The Swedish security services had their eye on him, on good grounds. In 2004, he left Sweden and went to Somalia, where he became a leader within the Islamist militia movement Al Shabaab. Four years later, it was reported that a 13-year-old Somali girl, Aisha Ibrahim Duhulow, had been raped. When she reported the crime, a sharia court found that she was to blame. She was sentenced to death and the punishment was carried out by stoning. The judge who sentenced her was none other than the Swedish Rinkeby-imam. Ten years in Sweden doesn't seem to have rubbed off as far as Swedish values are concerned at all.

Time to wrap things up.

The purpose of this text is not to portray Sweden as a land of lawlessness. You do not have to be afraid to visit Sweden. The country still works, thanks to a historic spirit of entrepreneurship and bureaucratic order. However, it is quite possible that Sweden is changing along the lines that American documentary filmmaker Ami Horowtiz described in his report on Sweden. A dark, parallel Sweden has emerged. And things are changing quickly.

The Swedish journalists and elite politicians like Carl Bildt seem unable to understand this. And that is why it is very encouraging for the Swedes who want to defend the Sweden we love, to hear the President of the United States talk about the things we can see with our own eyes, but regarding which we get no response from the elites who are more likely to travel to New York, than a Swedish suburb or small city.

It’s time to for the silent majority of the Swedish people to wake up and make Sweden great again. Mainstream media and establishment politicians won’t do it for us. 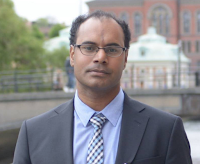 His lifelong ideological inspiration is Thomas Jefferson. He is currently working on a book in Swedish, about the presidency of George W. Bush, whom Ronie campaigned for in 2004.

Other articles in English by Ronie:

The United States: Still The Last Hope for Persecuted Christians 20141208

5 Things U.S. Conservatives Need to Know About the European Union 20130725