How should European countries approach immigration? While the answer to that question will of course differ from country to country, I believe there are some general guidelines that all countries would be wise to follow, that I am going to describe in this article.

To illustrate: Imagine that there was a global epidemic going on. Most of the world is infected, and the disease is deadly and (virtually) incurable. You have been appointed as manager for a safe zone - an area that hasn't yet been infected. Obviously, loads of people from the infected areas will attempt to flee to your safe zone. How do you deal with these refugees?

An open door policy would be kind-hearted but irresponsible, since it would certainly let the virus in. Soon, the safe zone would be overrun with infected, and if other safe zones followed the same policy, humanity's survival may be threatened. Sealing the borders may seem tempting, but this would be an extremely harsh policy, and would also deprive the safe zone of competent, non-infected individuals from the outside who could help sustain the safe zone.

Here's what I would do: Screen everyone who wants to enter the safe zone to ensure that they are not infected. Any sign of infection leads to immediate deportation - it doesn't have to be obvious that someone is infected, we can't afford to take chances. Since our screening abilities are obviously going to be limited, we can only accept a limited number of people at any given time. Finally, the right to reside in the safe zone can be revoked at any time if an immigrant is revealed to have been infected (and managed to fool the screening procedures).

What does this have to do with immigration?

See, this analogue isn't all that different from where we are today. Sure, there is no Contagion-style epidemic going on, but most of the world is in fact infected. Not with a biological virus, but with totalitarianism.

Europe, North America & Australia. That's where freedom and democracy flourish. The rest of the world, with very few exceptions, is still to a greater or lesser extent under the yoke of totalitarian regimes & cultures. Some are semi-democratic (Turkey, most of South America), others have no semblance of democracy (North Korea), but outside of these "safe zones", human rights cannot be taken for granted.

As we all know, people in the infected areas commonly attempt to flee to the safe zones, mainly Europe since it's geographically close to where most of them live. The problem is, they tend to carry the infection with them. And once in the country, they often "infect" others who were previously healthy - think; radical islamists corrupting young, moderate muslims.

What does that mean, in practical terms? It means that they carry totalitarian beliefs with regards to government and/or culture, beliefs that run contrary to what we in the West consider human rights.

Those who support mass emigration have cultivated a myth that those who flee from totalitarian countries do so to get away from totalitarianism. They have experienced the horrors of a totalitarian regime, so why would they ever want to turn a democracy into a dictatorship? They if anyone knows how bad it is. Sadly, this is not true: For us, it may be obvious that the totalitarian regimes are in such bad shape because they are totalitarian, but that's not obvious to those living in those countries. All they know is that they are poor, Europe is rich, and therefore they'd rather live in Europe. Even if you didn't like democracy you wouldn't move to Zimbabwe, would you?

What made the West rich was our belief in science, in competition, and in individual liberty. Because as it turns out, when you set people free, they can create pretty good lives for themselves. Sadly, a lot of people don't get this.

Daniel Hannan in a recent column told of his meeting with an islamist who told him that "We want your TV sets, not your TV programs". That is of course absolutely delusional, but it is a common delusion in the non-democratic part of the world: That a Western standard of living can be achieved without Western values. They don't understand that the same culture that creates freedom of speech and expression - which indirectly leads to TV programs which they find offensive - is the same culture that led to the invention of the television in the first place. When people are free to express new ideas, and take ownership and profit from these ideas, this results in new ideas in every area of society, including technology. 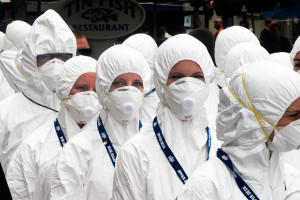 Immigrants who keep their cultures (beyond the purely symbolic parts) after arriving in the West prove that they don't understand why their nations are poor, and why ours are so rich. They are effectively freeriding by taking part of the benefits of our culture without contributing, and there is absolutely no reason why we should allow it.

Now some will point out that one limitation of the "infection" metaphor is that there is really no risk of everyone becoming infected. Normal, ethnic westerners will never be attracted to islamic totalitarianism. While there is some truth to that, people who make that claim ignore two very important things: First of all, that if a large segment of the population believes in totalitarian ideologies, then those ideologies will likely make their way into the mainstream one way or the other. Secondly, that even if they don't make it into the mainstream, regular people may turn to totalitarianism to combat the totalitarian ideologies of the immigrants.

Not everybody knows this, but before the rise of Hitler's Nazi party, communist revolutionaries were wrecking havoc across Germany. The rise of communism preceded the rise of Nazism in Germany, and that's not a coincidence - people turned to Hitler for protection against the communists. Without the communists, Hitler would likely never have been elected.

Similarly, while ethnic Swedes, Brits, Germans etc will never sympathize with radical Islam, they may turn to a totalitarian leader, or accept totalitarian measures, to protect them from radical Islam. If a large enough segment of our population consists of islamic extremists, we are going to see terror attacks every month. The Charlie Hebdo shooting, the London subway bombing, even 9/11 - they will all become everyday events.

Governments will, as they always do, use the chaos and social breakdown to introduce more surveillance and infringements on individual liberty. You thought the Patriot Act was bad? Imagine what governments would come up with if atrocities like 9/11 became regular events. Gradually, our countries may very well become police states just as a matter of necessity. Or, people may just go ahead and vote for a "strong leader" who will protect them from the Islamists in exchange for their democratic rights - similar to what happened in Germany.

That is the real threat from Islamic extremism. Some immigration critics like to talk about the "demographic bomb" that stems from muslims having many more children than ethnic westerners, but muslims are not going to be a majority in any western country any time within the next few hundred years. The real threat comes from what I described above - terrorist acts becoming so common that social order breaks down and totalitarian measures become necessary (or at least perceived as necessary). That is, in my opinion, the most plausible scenario for how democracy in the West may come to an end.

The only way to protect democracy is by limiting immigration to those who accept not only our TV sets, but our TV programs as well. I am not only talking about violent extremists - I do not want to see anybody here who even sympathizes with radical Islam, or any other ideology or cultural belief system that runs contrary to our values. There are more than enough immigrants from the "infected" parts of the world who believe in our value system that we don't need to accept anyone who doesn't.

If we do not throw off the chains imposed by the false doctrine of cultural equality, our democracy will perish, and future generations will rightfully judge is harsher than any generation that has come before us.