How do we fight ISIS?

That is a question asked on both sides of the Atlantic. Many different answers have been thought out: Some advocate the use of ground troops, others believe sanctions and air strikes can do the trick. There are valid arguments on both sides, and I won't discuss either of those options any further.

The Stockholm city council in Sweden however has a different idea.

I know you think what this is about: You think I'm going to tell you that the city council allows those who have travelled to Syria & Iraq to come back and keep whatever benefits they had before they left. Actually, if that was the case, this might not even warrant an article of its own, since it would just be Classic Sweden.

No, what the city council has done goes way beyond that: They've created a rehabilitation program which will see ISIS soldiers returning to Sweden be given preference for accommodation as well as earmarked jobs. They will also be given preference for medical & psychiatric care, since it is likely many of them suffer from PTSD (fighting infidels can take a toll on anyone's psyche).

Note that in Stockholm, due to extreme rent control policies, the accommodation shortage means normal people have to wait in line for on average 15 years to get a rental apartment. However, ISIS soldiers will now be allowed to jump the line. As for the jobs, even in Sweden authorities can't force private employers to hire ISIS soldiers, so those jobs will naturally have to be public sector jobs. Because who wouldn't want to have an ISIS warrior on the other end of the line when they call 911? They sure uphold (sharia) law & order in Iraq! And who wouldn't be delighted to send their kids to a public school with teachers who have such remarkable hands-on experience working with children... well, mostly selling children as sex slaves, but still!

In addition, the city intends to pour money into muslim organizations such as the Islamic Association of Sweden in an effort to prevent radicalization. The problem is that the IAS is itself a radical islamist organization which motto states that "death for the honor of Allah is our greatest desire".

This is nothing short of a new, crazier version of the good old Stockholm syndrome: Instead of a kidnapping victim sympathizing with the kidnapper, the City sympathizes with radicals who would like nothing more than to see the city burned down to ashes.
How did things go so wrong?

I know you're probably thinking, "how can anyone think that this is a good idea?". It's a perfectly valid question. The truth is that deep down, no-one does. Even the leftist city council who came up with this has had a hard time defending it, but it doesn't really matter.
This rehabilitation program is a logical conclusion to the left-winged worldview. And while no-one may support a logical conclusion to a worldview initially, as long as the worldview is accepted, the logical conclusion follows... well, logically.

In the worldview of the left, no individual is responsible for his or her actions. It's always the fault of the environment (or genetics). There is no such thing as free will, and therefore it's unreasonable to expect individuals to take responsibility.

This thinking runs through virtually all left-winged ideas. When individuals aren't responsible for their own actions, they have no right to enjoy the fruit of those actions; good or bad. So if you invent something and get rich selling it, it makes sense that the state should tax you in the interest of reducing inequality - after all, "you didn't build that". And on the flip side, if you drop out of school, smoke pot and refuse to get a job, it makes sense that the state should provide for you.

When everything comes down to "norms", "social constructs", "oppression" and "privilege", there is no room left for any personal responsibility. And that goes whether we are talking about a pot-smoking basement dweller, or an ISIS warrior: In the view of the left, they are both just victims of unfortunate circumstances which has robbed them of their ability to make good choices. 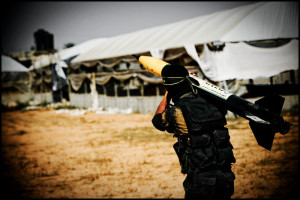 An Islamic terrorist. Does he look like he needs a job & an apartment? Photo credit Zoriah via Flickr (Attribution 2.0)

Those who defend this rehabilitation program claim that there are no other options. While they concede that the ISIS warriors may have made themselves guilty of crimes (far from obvious in their view), they maintain that the local city councils can't be responsible for punishing them - that's for law enforcement to deal with. The local city councils therefore have no choice but to treat them as socioeconomic misfits and help them accordingly.

This is of course absurd: First of all, while the city council cannot sentence and imprison ISIS warriors, that does not mean they have to provide additional incentive to join ISIS. Second of all, the city could and should discourage youngsters from joining ISIS by promoting good old fashioned war propaganda: Make sure that every muslim in the city knows that joining ISIS means certain death. I remember back when  I was in school from time to time the teacher would bring out the TV and have us watch educational videos. Why not have kids watch a video showing US drones raining down hell on ISIS territory? See, kids who join ISIS do so because they believe that ISIS will win. If we can only make them understand that ISIS will lose and that their soldiers have in effect signed their own death warrants, joining ISIS won't seem so attractive. You can also inform muslim kids that if they do join ISIS, they won't be assigned to any of the "cool" jobs - they don't have any military experience, so they'll mostly become water boys & clean latrines.

The city could also help the law enforcement by rewarding those who decide to turn informers: If you provide information leading to the conviction of an islamic extremist living in the city, we'll pay you $10 000. That's not a lot of money for a big city like Stockholm, and unlike the "rehabilitation program", this would send the right signal: It's open season on ISIS sympathizers.

So yes, there are other options. These options sadly will likely continue to be ignored by the Swedish establishment in favor of options that are in line with the liberal worldview, which intend to spoil the extremists and hope that this makes them like us. Sadly, just like kidnappers do not suddenly start to like their victims just because they develop Stockholm syndrome, terrorists won't suddenly care more for Swedes who develop the new Stockholm syndrome. And that's a lesson we must pray Stockholm does not have to learn the hard way.