This article is a follow-up to my last post, about why the government shutdown is a mistake. This time, I'm going to dig deeper and analyze the underlying problem with the Tea Party movement's perception of reality.

Now before I begin, I feel it's necessary to remind everyone that policy-wise, I agree with the Tea Party at least 90 % of the time. And this is the reason why the Tea Party upsets me so much - we fight for virtually the same thing, but their lack of intellectualism, education and frankly manners makes their fight counterproductive. The Tea Party is hurting the values and ideas that I've believed in since I was 10 years old (that's how old I was when I first got involved in politics).

I used to oversee with the Tea Party's flaws - back in 2010, I defended the Tea Party vigorously on the blog I had back then. I realized that the Tea Party was extreme, but, to quote myself, I thought it was "necessary extremism" - sure, the Tea Party didn't have the most intelligent leaders at the time, but they increased party morale and energized the base, which was necessary after the disastrous 2008 defeat.
Now of course, I didn't think the Tea Party would get to actually pick our candidates. Or at least that if they did, they'd actually think a little before choosing. After all, we all know that as much as we love conservatism, there are a bunch of voters in the middle whom you have to reach out to if you want to win. Especially in the blue and purple states.

I guess I was young and naive. While the Tea Party energized the Republican base, it also destroyed the credibility of the party. In the 2010 elections this damage was concealed by an anti-establishment wave, which the Tea Party took to mean that their methods were working. Of course, anyone with the faintest knowledge of political history understands that outrage against the establishment is hardly a new thing - similar waves have happened before at different points in time, sometimes hurting the democrats, sometimes republicans. The Tea Party really are a strange type of conservatives who refuse to learn from history, given that one of the main tenents of conservatism is to learn from history rather than reject it the way utopian ideologies (like communism) do.

I've been thinking a lot about why this is - how can they not learn from history, how can they think their strategies are going to work? How stupid do you have to get to believe that someone will be convinced to join your side if you demonstrate using a sign that says "Obama is the antichrist" or "Obama is Stalin"? How can you honestly believe that that will do anything except make people think you're a weirdo and give fodder to the late night talk show hosts? How can you think that you'll ever convince anyone by spamming comment fields on Politico with "Obummer is a kenyan socialist"?

I think I might have the answer, and it is what I would like to call The Hollywood fallacy: "The good guys always win in the end"

When you ask a Tea Partier how they are ever going to actually win the presidency, they typically give you an answer like "Well we want limited government and restorating America to its constitutional foundation". That's great of course, but it doesn't answer the question: How exactly are you going to win? What's the game plan?

The truth is that there is no game plan. The Tea Party views itself as the "good guys" and, since they're the good guys, they don't need a plan, because the good guys always win in the end. We all know that - no matter how stupid you are, even if you're Forrest Gump, things will work out for you because you have such a good heart and intentions. You will simply be lucky, because that's what signifies a good guy's life - endless of luck that gets him out of every tough situation (remember how Jesus totally got out unscathed after he was arrested for blasphemy?).

Here's the thing, though - these people, and the people behind all those causes, all had a plan for how to get a majority of the population & congress to agree with them. The woman's suffrage movement didn't win because they were right; they won because their understanding of political strategy was far superior to that of their opponents. Thaddeus Stevens had argued for abolition far longer and far more loudly than Lincoln - he was arguably an even better guy than Lincoln would ever be, as he also supported equal rights for blacks (something Lincoln did not). Yet, Lincoln is the one who was elected president, and Lincoln is the one who got slavery banned. Why? Because he had a strategy, he was willing to compromise and to work across the party lines.

Other good guys - like Churchill - were in fact quite lucky. But how did things end for Churchill? He was voted out of office just a few months after World War II ended, and because of that, the UK became a socialistic welfare state. Why? Well, churchill didn't really get his office by being good at politics - since WWII was going on, appointing a man who had been first lord of the admirality as prime minister made sense after the previous PM had to resign. Churchill did a great job during WWII and enjoyed high support, but still, three months after Victory in Europe day, voters rejected him. What went wrong?
Since Churchill made it to PM without any political strategy, he figured he'd never need any political strategy, ever, for anything. After all, everyone had united behind him during the war - that must mean they like him, right? Surely that would carry him to victory in the post-war elections.

As it turns out, Churchill's temporary popularity during the war was more of the "national unity" type that George W Bush enjoyed after 9/11. When Churchill, in the following election campaign, compared the Labour party with the Nazis, he sealed his fate. The British parliament has a total of 602 seats, and in the election following the war, conservatives lost 189! Turns out even war heros need to watch their mouth, refrain themselves from insulting their opponents with farfetched parallels, and just in general think before they act.

If Churchill had won, Britain may never have become a welfare state. The course of history was changed because one good guy who fell victim to the Hollywood fallacy: He thought he would win just because he was "the good guy". 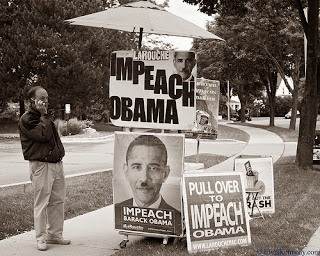 Tea Partiers like to make claims like "Once everyone hears our message, they'll join us" and "If we weren't silenced by the lamestream media all americans would know what we stand for and agree with us". This is a common trait shared by pretty much all radical movements: "Once they understand our point of view, they will have to agree with it" - and by extension, anyone who disagrees is uninformed. Again this is a theme often seen in Hollywood movies - the misunderstood hero who gets his revenge once he can get people to see beyond his looks/background/other superficial negative trait and see him for whom he really is.

Vegans tend to act the same way - "if people only understood that animals have to suffer for humans to eat meat & dairy, they'd join us". Personally, I understand that animals have to suffer for me to get my pork chops and sausages, but I eat them anyway. Vegans claim that my actions mean that I can't possibly have "fully" understood their philosophy, just like those who disagree with the Tea Party must not fully have understood the dangers of deficit spending and the benefits of low taxes. Just like many vegans think they can convince people just by screaming "meat is murder" and other simplistic vegan slogans, Tea Partiers believe that screaming "Obama is a communist" and "Obamacare is genocide" - after all, the only reason why someone wouldn't agree that Obamacare is genocide is that they haven't been informed that it is, right? Screaming at them solves that problem. It's not like someone could understand the issue, and yet disagree. At least not in the perverted universe of a Tea Partier.

However, there is another reason why the Tea Party prefers screaming to arguing: They simply don't know enough to argue for their cause. They got their hearts in the right place, but they don't understand why they have to read about the issues. The Tea Party movement is by nature anti-intellectual, and that is its biggest weakness. While the conservative movement that gave us Goldwater & Reagan embraced intellectualism and higher education, the Tea Party instead celebrates the hillbilly who didn't graduate high school. They will even choose him in a primary over his master's degree-holding opponent!  Just like in a movie; the hero is poor and uneducated (like Leonardo DiCaprio in Titanic) while the antagonist is a rich Ivy league graduate.

The minute the Tea Party understands that the real world isn't like a movie, they can actually become an asset to our party.

This is it for today - my next post will deal with the fallout that the government shutdown (in my opinion) will have on the Tea Party. Thanks for reading.